Thinking about American Indian (his term) Vine Deloria’s book We Talk, You Listen, which, among other things, discusses Marshall McLuhan’s theories as they apply to the Civil Rights movement. The message gets lost in the image. The image becomes the message.

How do we get the media to show all of the images? What role does the need to sell papers/get ratings play in choosing which images get shown?

In the wake of the failure of the grand jury to indict Darren Wilson, protests have exploded all over the country. The internet has also predictably exploded with people condemning the rioting and looting that have been an unfortunate component of some of the protests. The theatre around this issue is fascinating, and enormously telling.

There have been peaceful protests in Ferguson (and elsewhere) literally every single day since Michael Brown was killed. Here are some shots: 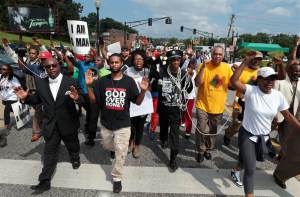 There's an incredibly useful article over at the Playwrights Center website (not Playwrights' Center of San Francisco, the group I'm involved with, but the national one in Minneapolis), Tips From Artistic Directors. In that article, there are a lot of positive tips: send your best work, follow guidelines, and many more. Two ADs chose to … END_OF_DOCUMENT_TOKEN_TO_BE_REPLACED

PROLOGUE: My other blog

SCENE 4. My actors (hover for productions seen, my readings)

SCENE 6: My directors (hover for productions seen, my readings)